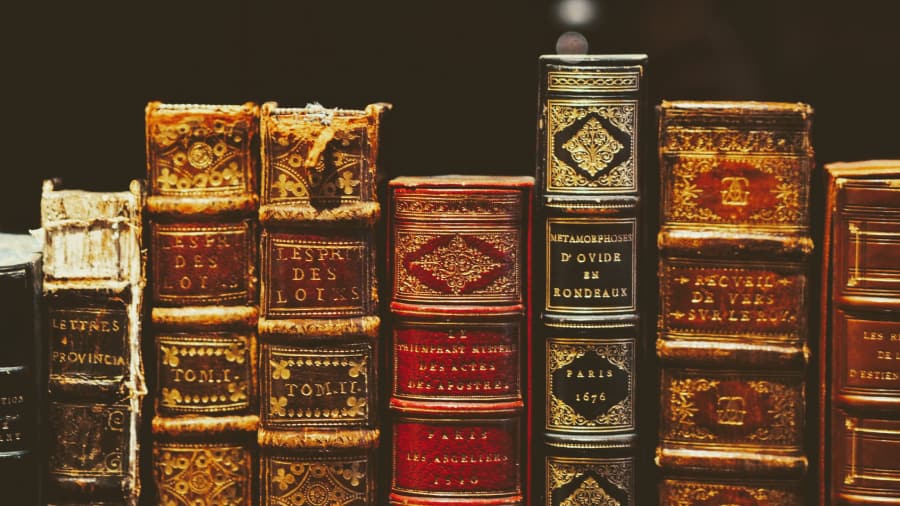 Things that have stood the test of time tend to be prized and valuable. Old things give us a bit of insight into history, an ancient culture, or extinct natural life, or they tell us what was deemed important or of beauty in the past. It’s why we still visit historical sites, admire classical works of art, and read ancient texts.

Especially for the latter it’s rare to be able to read something that’s thousands of years old. Paper degrades easily, fire destroys collections and libraries, and people (monks or scholars usually) had to keep copying texts in order for it to remain legible and safe. This was not an easy task – not to mention highly time-consuming – but these efforts indicate that a text had a certain amount of worth and was deemed valuable enough to spend time on.

There is of course a high chance of survivorship bias for the old books that we still have today. Perhaps we can read it not because it’s valuable or any good, but purely due to some fortunate circumstances that enabled the preservation of the text. But as a general rule though, the older a book is, the more valuable it tends to be.

So what is the oldest surviving book that we can still read today? Well, the first thing to realize is that this question is actually a bit more tricky to answer than you might think at first glance.

What, for instance, is a book exactly? Is it a physical manuscript that has survived? Or does it also include texts that were meant to be printed or used as a book (in contrast to, say, a pamphlet), but don’t exist as original copies any more?

Secondly, at what point can we say that a book or a text has “survived”? Does a 100% of the text still have to be available? 80%? Or do surviving fragments count? Fragments, obviously, are way more common than complete works.

Some contenders for the oldest book

Depending on how you answer those questions a good contender would be the Gutenberg Bible, which is probably the oldest printed book (from around 1450 CE). But of course books don’t need to be printed, they can also be written, etched or carved. And, if you allow for that modification, then the answer could be the Etruscan Gold Book which dates from 600 BCE and is made up of six 24-gold carat pages.

If we make another modification and look at the oldest book text that’s still available (i.e. dropping the physical manuscript requirement), then we go back a few more thousands of years. In fact, we pass by some of the most popular old books that people still read today, like the Bible, the Iliad and the Odyssey, and the Epic of Gilgamesh.

Moving through the surviving literature of ancient Rome, ancient Greece, and Mesopotamia we end up in ancient Egypt. One of the oldest text there is the Egyptian Book of the Dead. Although ‘book’ might be a bit of a misnomer since there’s not a single version of the Book of the Dead, but it’s rather a collection of burial texts with some of the earliest versions dated from around 1550 BCE. These texts were written on papyrus scrolls and placed in coffins or burial chambers and were meant to assist the deceased person in the underworld (they even contained a number of magic spells that were supposed to help them!).

In terms of fragments we can go back even further: the Egyptian Pyramid Texts date from around 2400 BCE, and there are some Sumerian fragments even older than that, being dated from around 2600 BCE.

But there’s one book that’s even older than the Egyptian Book of the Dead, that’s fairly complete, and still orderable and readable today: The Instruction of Ptahhotep (Amazon, or view my notes). Written around 2300-2400 BCE, it’s a collection of maxims from Ptahhotep, a high ranking official under Pharaoh Djedkare Isesi.

It’s pretty amazing to think that these maxims are over 4,400 years old and still available and in print today. That’s an amazing span of time that not only gives insight into the society of Ptahhotep, but also into what he considered to be important.

This is all the more true since these instructions are part of what is called wisdom literature: collections or books written specifically to convey advice from the wise to the young. Ptahhotep, for instance, instructs his readers on virtue, wisdom, divinity, leadership, and character. Imagine a combination of Machiavelli and Marcus Aurelius, but born 2500-4000 years before either lived.

Of course some of his advice is highly dated (how could it be otherwise?), but what’s remarkable is not that some things are dated, but that a large part is not. It still has relevance, even today – and, in fact, some of these maxims feel like they could even have been written yesterday.

The Maxims of Ptahhotep

So what does Ptahhotep offer as advice? Most of it relates to human nature, which is why the advice is still quite relevant; human nature changes but little over time.

The gist of the instructions is this: If you have wealth, share it – there’s no value in hoarding it. Become a good listener and don’t talk badly about people behind their backs. Be the bigger person, or aspire to be one. Don’t be proud or boastful, and don’t let flattery get to you. Try to be excellent in everything that you do.

Here are some quotes:

“The flame of the hot hearted sweeps across every thing. But he who steps gently, his path is a paved road.”

“If you are angered by a misdeed, then lean toward a man on account of his rightness.”

“If you want to have perfect conduct, to be free from every evil, then above guard against the vice of greed. Greed is a grievous sickness that has no cure. There is no treatment for it. It embroils fathers, mothers and the brothers of the mother. It parts the wife from the husband. Greed is a compound of all the evils. It is a bundle of all hateful things.”

“If you are a man who leads, a man whose authority reaches widely, then you should do perfect things, those who posterity will remember. Don’t listen to the words of flatterers or to words that puff you up with pride and vanity.”

“If you are among the people then gain your supporters by building trust. The trusted man is one who does not speak the first thing that comes to mind; and he will become a leader.”

“If you are mighty and powerful then gain respect through knowledge and through you gentleness of speech. Don’t order things except as it is fitting. The one who provokes others gets into trouble. Don’t be haughty lest you be humbled. But also don’t be mute lest you be chided.”

“If you are a man of worth who sits at the council of a leader, concentrate on being excellent. Your silence is much better than boasting. Speak when you know that you have a solution. It is the skilled person who should speak when in council. Speaking is harder than all other work. The one who understands this makes speech a servant.”

“Do not be proud and arrogant with your knowledge. Consult and converse with the ignorant and the wise, for the limits of art are not reached. No artist ever possesses that perfection to which he should aspire. Good speech is more hidden than emeralds, yet it may be found among maids at the grindstones.”

Clearly some of the above advice sounds dated, but overall it’s incredible to think that this was written more than four thousand years ago. As a society, and as a species, we’ve made a lot of progress since then, but when it comes to our own nature and psychology Ptahhotep’s advice is still relevant today.

Arguably this is one of the oldest, if not the oldest, book in the world – at least as far as I was able to find. If you’re interested in old texts and books, or enjoy aphorisms in general, then The Instruction of Ptahhotep is a fascinating read.